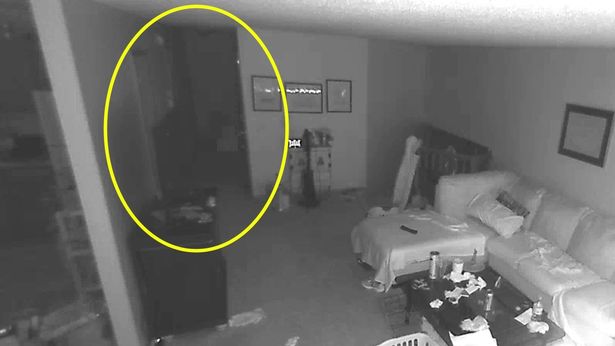 Joey and Amy Radke, of Shakopee, Minnesota claim to have captured footage of a spirit outside their bedroom door.

The couple moved into the property two years ago and had yet to experience anything that made them feel uncomfortable, until they reviewed their CCTV footage.

Despite warnings from people telling them the property was haunted by demonic entities, the two set up cameras so they could keep an eye on their pets, but the couple claim they got more than they bargained for when they captured this ghostly entity.

Joey, 37, says the landlord did warn him before he moved in with his wife, Amy. The landlord claimed she had previously sensed a presence in the house, and that a previous tenant had also claimed to have felt ‘demonic entities’ watching her as she slept.

Joey said: “This is the first time I’ve seen anything. We see it going from right to left. That room is my wife’s office and it’s always cold. I was in there a couple of days ago and I could see my own breath but we have a furnace in the house and thick plastic on the windows and you can feel the temperature difference when you go out into the hallway.

“I definitely know my cats saw it because one goes under the glass coffee table and peeks out down the hallway looking directly at the figure. The figure is definitely levitating because it’s taller than me.

“About 20 seconds after it disappeared, I come out to go to the restroom and walk right through where she was standing. I think it’s cool because I’m more curious. I want to see it again so I can ask questions”.